Every November, Cambodia celebrates National Sanitation Day to promote improved sanitation for all people. Lifewater in Cambodia joined in the celebrations with more than 200 people, gathered at Rohal Primary School in Lifewater’s project area in Siem Reap Province. Along with thousands of other people marking the day at events nationwide, the village chief, school leaders and students, Lifewater staff, and local officials gathered under a large tent on the school grounds to raise awareness about sanitation. As colorful bunting blew in the breeze, they shared the following key messages about sanitation: 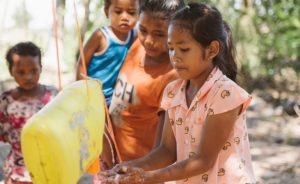 According to Lifewater’s provincial manager, Mr. Veasna San, the most exciting part of the event wasn’t the handwashing games, the speeches from community leaders, or even the opportunity to watch a video of the Prime Minister encouraging good sanitation practices. It was when the school children had an opportunity to participate in question and answer time, demonstrating they understood the key messages. Many children raised their hands to ask questions and share what they had learned. Each brave participant earned a bar of soap.

Afterward the Svay Leu district chief shared with Lifewater that this was the first time a National Sanitation Day event has ever been held in his district. Lifewater’s baseline survey earlier this year revealed that 83 percent of households in Svay Leu do not use a latrine, and 50 percent of young children have suffered bouts of diarrhea in the past 7 days. The chief is motivated to change these numbers, however. He is already planning to hold another National Sanitation Day event next year to continue spreading the word to residents that “Good sanitation is our responsibility!”